The Kokoda And Black Cat Trails 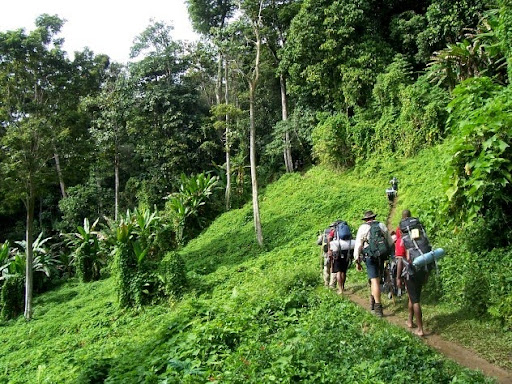 The Kokoda Trail is nearly 100 kilometers (60 mi) of hot, humid, treacherous, leech-infested territory running between the northern and southern coasts of Papua New Guinea. Its rainforests have exotic animals, jungles, clean water, and villages of native peoples who have lived off the land for generations. It is also the site of numerous World War II battles, fought between the Australians and the Japanese.

And every year, thousands of visitors make the trek, amid the threat of everything from trench foot to death. Walking the entire trail means six 10-hour days of walking, climbing, and swimming. Everything you need, you have to carry with you. Mountains make the miles seem even longer, and all the while you're swatting mosquitoes that may or may not be carrying malaria. Walkers are escorted by guides, and along the way, many learn about the stories of the soldiers who fought and died in the old foxholes and amid the abandoned machinery. Dehydration, broken bones, and illness are the biggest threats, but there are others.

In September 2013, a group hiking the neighboring Black Cat Trail was attacked by a group of locals made up of villagers and escaped convicts. Two porters died after the machete attacks, and seven others were severely wounded-including one Australian who took a spear in the leg. Passports and personal belongings were stolen, and the whole thing was thought to be spurred by an ongoing battle between local tribes and villages-a battle to capitalize on the lucrative tourist trade acting as guides to those who come to walk the trails.